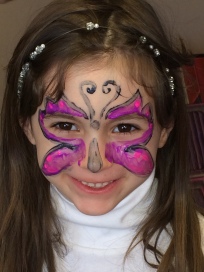 I actually wrote this poem a few months ago. That particular night, however,  I did not have the emotional energy to post it, and since then the Princess and I have been sailing pretty smooth waters, so it has felt less relevant.

Today, however, it feels very authentic. It’s not that her behavior was so very unreasonable. She was justifiably frustrated about Mommy and Daddy working through virtually the entire snow day, while she and her brother had to entertain themselves. (By the way, I have discovered the downside of having a job that let’s me work from home).

Then at the end of this long, somewhat boring day, after Mommy had finally shut down her computer, Princess Imagination didn’t get to do her “show” at the exact moment she wanted to and she lost it. She’s seven. I understand.

Mother to a butterfly

This smooth, hard floor is scraping at my patience

the urge to Just…Get…On with this damned metamorphosis.

This silent sitting nearly breaks my will

not hers, as I suppose I’m hoping for.

Resentment at this stasis brings distressing will to break.

But, staring at that fragile, frame curved in

around her anger, pain, thoughts I can’t read

I know cocoons must open from inside, I can’t break in.

And so I wait, exhaling stuttering prayers,

an incoherent hope that I won’t fail,

that love can still me long enough to give her time to grow.

Because, whatever started this display,

I know that what she needs is not my words,

but presence, that can prove I love her – butterfly or worm.

And then, soft miracle for both our hearts,

bright wings, unfurled now, curving around me; I get to see my butterfly reborn.

The first week back from holiday travels left me a bit drained.

Actually, to be honest, it is not just the return to reality but also the two weeks of holiday that left me feeling out of balance. Or, perhaps the experience is better described as a distracting sensation of background buzzing that makes me want to shake my head, or maybe shake my whole life, to rid myself of the discomfort.

As I have struggled to find mental and emotional focus, it has become increasingly clear that this distress results from two strangely cooperating, though entirely opposite experiences: Excess and Lack.

Holiday Excess is a familiar theme.

Excess food – stretching my willpower and my digestion (not to mention my jeans).

Excess gifts – three different family celebrations leaving my children with the expectations that new presents should be offered every few days, and at least partially distracting them from satisfaction with the gifts themselves.

Excess luggage – to load into cars, and haul through airports, and cram into overhead bins while my aching back protests.

But the sense of overload merged discordantly with a suffocating sense of lack as well.

Lack of time – to just sit and talk and enjoy the people we travelled 3,000 miles to see.

Lack of home comforts – like my own bed, or a dresser full of sweaters I had not already worn twice in the prior ten days.

Lack of space – for the simple, restorative rest of solitude when I’m feeling overwhelmed.

It’s such a first world problem, I know, to complain about a two-week holiday in California with so many family members whom I love, but … I am a first world woman. The perspective to be able to recognize my privilege did precious little to actually resolve the emotional strain wrapped around me like a poorly insulating blanket as I stepped back into the cold New Jersey winter.

And that return brought its own sources of layered excess and lack. Excess of workload trying to pick up all the dropped threads of my two-week hiatus. Lack of hours in the day to give each task the attention is deserves. Excess of mess in my home after the luggage vomited its contents over every flat surface in the living room and the oozed around the rest of the house over the next few days. Lack of patience for my beloved family members who apparently did not consider this mess a problem, or at least not one they had any role in fixing.

Collapsing into bed each night this week I felt totally out of balance, with a body protesting its exhaustion and a mind already whirring with the to-do list for tomorrow. I needed rest and peace and centering, but even battling to fall asleep felt like a continuation of the tug-o-war. A few nights I whispered a faint prayer, but prayer for me is usually a discipline before it grows into a joy. And it’s hard to be disciplined when you are flailing your arms trying desperately not to fall.

Then came my return to weekly yoga class as I was praying (with or without discipline) for 75 minutes of blessed balance. That is I was incoherently muttering my prayer until I saw the teacher. It was not my beloved Suzette who has taught me the joy of breathing. No, it was Ruth, the G.I. Jane of community yoga. There would be no balance today. That is to say, Ruth would almost certainly push us to try some crazy arm-stand balance pose that would make me want to cry. But this class was not going to be a restorative, re-centering practice.

I wanted to just sit it out. I was tired. I was stressed. I was not in the mood to be pushed. But I have been trying to coast the kids on sticking with their commitments. Sitting on the lounge while they did their kids yoga class would be a little hard to explain.

So I did it. It was really hard. I was sore for three days after.

Something else has lasted even longer than my sore muscles however. That night I learned that balance might actually be about Enough.

The only way I was going to get through yoga that night was by doing Enough, and not too much. If I tried too much I was not just going to be waving my arms, I was going to fall on my head. So I didn’t. I pulled back.

It was so hard to do. I have always been an over achiever. I get far too much of my ego from accomplishments, and I have a driving need to be the teacher’s pet. Whenever there is an invitation to “challenge yourself” I try to take it. The encouragement at the beginning of class to “only do what is right for you today” never feels like it applies to me.

But this time, it did. It was humbling, but it was also balancing. Enough is a really solid place to stand.

I have tried to hold onto this lesson in the days that have followed. I have mostly failed. I said “no” to one request today, but “yes” to too many others. I still feel pummeled by Excess and Lack. I am still wind-milling my arms in a frantic attempt to avoid the plummeting fall. But when I have realized this, I have just repeated the lesson. “That’s OK. ‘Enough’ is hard. You can’t expect to get ‘Enough’ right on the first, or second, or tenth try. Just trying to do ‘Enough’ is Enough for now.”

And so I am writing this post – my one hundredth, a post that I had wanted to be beautiful, and poetic, and perfect – with a fuzzy head that doesn’t feel like I am really saying it all clearly Enough. But I am still writing, and praying, that maybe tonight my Enough will be a gift to someone. 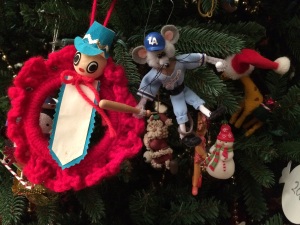 The Christmas tree is still up, and giving mute evidence that the kiddos have a hard time locating Enough as well.