I have officially missed my chance to experience the couture euphoria that is the bi-annual Milan Fashion Week.

Although I have never been a fashionista, I had always assumed that

I would take advantage of this emblematic experience of the fashion capital of the world at some point in my nearly 3-year residence. It’s the sort of thing you are just supposed to do. It’s like seeing the Sistine Chapel when in Vatican City, or taking a Gondola ride in Venice. The experience is not complete — you have not felt the beating heart of the city — without that essential component. These icons may not be elements of the daily life of the locals, but they are still bound to the identity of the city itself and thus are not to be missed, however far they lie from any individual visitor’s natural interests.

Of course, having introduced those parallel examples, I have to admit that my first visits to the cities of the Popes and of the canals did not include the requisite sites.

The cupola of St. Peter’s Basilica

For our family’s first trip to Rome we had budgeted only one day for Vatican City and we hadn’t booked our tickets ahead of time. When we arrived in the square of St. Peter’s Basilica the line for the Museum (the only way to access the Sistine Chapel) had already wound the kilometer or so from the Museum entrance into the square. With a 21-month old in arms we weren’t eager for that 3-4 hour wait. So, instead we opted to climb the cupola of the Basilica. Of course, we hadn’t really thought through the whole infant-in-arms factor, since he certainly wasn’t climbing all those stairs, nor was then 4-year old Princess Imagination! Once we had recovered from that cardiovascular stress test, we called it a day!

View from the top (almost worth the climb!)

The Gigglemonster found Daddy’s hat much more entertaining than the view.

We did manage to hit the Piazza San Marco…

My first trip to Venice also lacked the quintessential experience of the canals because I was there with my Mom, my older sister, and my two little ones (rather than my husband) and I figured I would save the romance for another trip.

That’s one of the things about “visiting” Europe as a resident — it has always felt like I would have the chance to catch the things I haven’t yet done. In the last 3 years I have spent exponentially more time as a tourist than I had spent in my entire 33 years prior to landing in Italy, but I have done all that touring with the background knowledge that I’m not really that far from home. I would read my guidebooks and make my plans, but when the reality of travelling with young children inevitably derailed my schedule that was OK. I could always plan a do-over.

In the case of the Sistine chapel and the gondola ride, this was well-placed confidence. Along with Robin Williams’ character in Good Will Hunting, I now do know what it smells like in the Sistine chapel (sweaty tourists) and also what it sounds like (low murmurs in countless languages regularly interrupted by staccato loudspeaker demands for silencio). Less of a disappointment were my two gondola rides – the first with my younger sister who shares my enamored response to the city of magic waterways, the second cuddled next to my husband watching the delight play across the faces of our children. Both floating adventures offering a unique celebration of the romance of the canals. 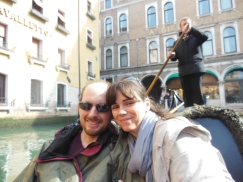 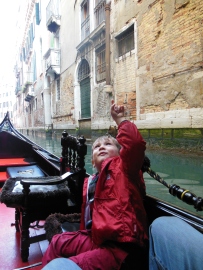 In the case of Milan, however, my casual assumption that I would eventually get to a Milan fashion show has not be fulfilled. The fall fashion week overtook the city last week, and I barely noticed. There was one electronic announcement of Vogue’s Fashion Night Out that floated through my inbox, but my life was too busy with grocery shopping, and sick children, and school events, and birthday parties to take much notice. I wasn’t even engaged enough in the manifestation of the city’s obsession to really regret my non-involvement.

To be more accurate I should say that I felt no regret UNTIL I drove past one final event yesterday afternoon. Our apartment, in a very non-posh residential area of the city, is strangely close to a permanent Calvin Klein showroom. This venerated space is usually closed up and walking by the tinted windows yield my curious eyes only glimpses in shaded silhouette of monochromatic clothing racks . Yesterday, however, the exclusive doors were thrown open and a small crowd of beautiful people were gathered on the street, the creative parking of their luxury cars blocking traffic and their air of sophisticated ennui gliding down the sidewalk to intimidate my mommy-blogger soul as I slunk past in my bright blue Citroen Picasso.

I suddenly hit me that this was it. I was never going to have a chance to blend into that chic crowd and experience my moment of glamour by association. The realization was painful. I don’t think my vanity is exceptional for a thirty-something American woman, but neither do I relish the obligation to think of myself as a fashion outsider. Considering my attire as my longing gaze slid past all the pretty people, however, I had to face facts. I was dressed in a plain, white, cotton sweater, boot cut Lucky jeans, and (cringe) scuffed up brown clogs! Back in the States this get-up would be perfectly acceptable attire for any number of social events (not to mention Sunday errands, which was what I was doing). In Milano, however, Lucky is not recognized as a brand, the only recognized style of jeans are skinny jeans, and I have never, ever, seen one single other person in the city wearing clogs. If I had tried to enter the fashion show in that pitiable outfit, it’s entirely possibly that the illustrious brand being presented would have permanently banned me from ever purchasing their clothing. They might not have actually sent wanted posters sporting my picture to all of their international stores, but then again…

It was a low moment for me. I wanted to be above it all. I wanted to be able to hold my head high and confess without shame that “fashion isn’t my thing and I don’t really want it to be.” I’ve always been happy to ignore name brands and style trends and just wear what looks good on me. But the fact is, Milan is contagious. Just as I could not visit Vatican City without absorbing some level of awe for the grandiosity of the Roman Church, and I could not escape Venice without inhaling a craving for the fragile beauty of blown glass and floating palaces, so it seems that I have not walked the streets of Milan without succumbing to the endemic worship of the god of fashion. I can roll my eyes at the price tags and wince at some of the more extreme attempts of the select fashion plate moms who frequent the kids’ school, but deep down I envy the women who could step out of the school corridors and onto a magazine spread. It’s not just their perfect size 2 figures (although that doesn’t help), or their glowing olive skin long after my summer tan has disappeared, it’s also the posh image they project. They look beautiful, and stylish, and like they belong, which leaves me feeling unattractive, and frumpy, and like an outsider.

Which leaves me with a question about I would change, if I could. Would I spend the time to follow each new trend and the money to adhere to it? Would I fill my closet with dry clean only couture that requires a second closet for matching shoes? Would I actually wear the daring fashions that look so chic on others because they have the attitude to pull them off? I can’t pretend that I don’t sometimes long to look like that, but do I really want to change myself? Because, really, fashion is not just the clothes one wears, it’s also how one wears them.

I am aware at this point that this post could read as very judgmental, and that is not how I mean it. I am not judging the spiritual depth or the personal admirableness of any of the moms whom my jealous eyes follow. In fact, some of them have become my friends and the last 3 years have taught me a lot about judging by appearances.

But the realization this last fashion week has brought to me isn’t about them, it’s about myself. If I were to embrace the world of fashion, committing the time, and energy, and money that would be required to keep pace on the streets of Milan, it would mean changing myself. It would mean a reprioritization that pulled away from things I really want to value more. I can confess that all the pretty people make me jealous, that they even make it hard to hold to my personal integrity. But jealousy is slightly different that value. And at my core I know that’s just not me.

So, the fact that I have missed out on fashion week is a bittersweet reality. I don’t doubt that it would have been fun. Had I managed to wrangle a ticket to some minor show I could have wrestled something from my closet that would have spared me total humiliation. I would have enjoyed the glimpse of glamour, and sophistication, and the life of another world. But ultimately, I can’t really regret the miss. The truth is that I am more than a little eager to escape the streets of Milan and their ever-present pressure to present a fashionable face. Italy I will miss: the language, the food, the many friends we have made. But I won’t miss the fashion that is so central to this city. It’s beautiful. But it isn’t me.

My family are the only accessories I really need.

In early 2011 my family moved our home, temporarily, from New Jersey to Milan, Italy. In the process I quit what had been my dream job conducting policy-directed social science research, to focus on my other dream job, raising our two young children. The three-year adventure was exciting, exhausting, disorienting, fulfilling, and countless other contradictions. It also birthed in me a desire to share my reflections on life's joys and challenges with anyone who cares to reflect with me. Now that we have returned to the US I'm finding that the new perspective I gained in Europe has come with me, and gives me a whole new way of interacting with my home. There's still so much to learn and share! I hope you'll share the journey, and add your own lessons to my daily education.