Autumn is a time for messes. Leaves fall from trees and make messes of lawns. Return to school rearranges schedules and makes messes out of lingering, lazy summer habits. Shifting weather demands widely divergent clothing from one day to the next, making messes of tiny closets forced to fit to two season’s worth of clothes.

And, I suppose, these shifts also tend to make messes in my mind. Much as I tend to live in the future – always planning for what comes next – the actual experience of the shift tends to overwhelm me and disturb me with the reminder that I really have very little control over much of anything.

Today I experienced one such reminder, and also an antidote, at least of sorts.

I spent 90-odd minutes of the afternoon watching a heartbreaking film, with my darling 7-year-old Princess Imagination cuddled beside me. The film was American Winter, and I was watching it because I am a panelist for a screening event tomorrow afternoon and I needed to know its content in order to prepare something intelligent to say about it. The film shares the devastating stories of 8 families who were basically flattened by the Great Recession. They were families experiencing homelessness and hunger, unemployment and foreclosure. They faced moments and months of stress, anxiety, and despair, and while the film also reported some glimmers of hope, there was not a nice, neat happy ending for most of them.

These are stories I have heard too many times, and stories that are in one sense my stock in trade – the reasons I go to work each day as well as the way in which I argue and plead for economic justice. But watching them with my sweet daughter at my side was something new. She kept asking questions – questions that made me stop my analytical assessment of how to frame my response and actually engage the pain spilled out across my screen. Her most frequent question was why, and the aching quaver in her voice spoke both of her innocence and of the innocence I’ve lost.

I was shaken by her horror that such things actually happen to people. That parents skip meals so that their children can eat. That children feel responsible for making sure their mom packs herself a lunch. That widows and their sons have to sleep on cots in shelters, and that families live for a month with no water and no electricity. I was shaken because these things truly are horrible, and once I get past my defense mechanisms as a professional advocate, I still don’t know how to deal with it.

I’ve committed my career to fighting poverty and I work hard at it. I can rattle off my economic arguments against trickle-down theories and list 5, or 10, or 15 policy changes that would make a practical difference for families trapped by poverty. But I don’t know what to do when my daughter’s eyes fill with tears about the pain of strangers. And when her soft, shaken voice whispers into my shoulder her confession that “I’m glad we don’t have to live like that,” my heart must honestly respond “me too.”

And so, my mind and my heart were a bit of a mess this afternoon, when the kids asked permission to go outside after the film. We took our big bucket of chalk out to our ample driveway to draw pictures and little messages of love. Then the mess of leaves strewn across our yard challenged an attack. So, we took up rakes and sallied forth to do battle. We conquered one small corner, and then conceded some of the hard-fought ground to celebratory pile-jumping and complicated maneuvers involving the red wagon as a transport device ill-equipped to move children and leaves in the same load.

It was a simple, silly afternoon and I was poignantly aware of just how fortunate we are to have that chance.

AND – I watched the light dance in my daughter’s eyes more delicately than the leaves she was throwing into the air, and that light lifted the cloud from my own heart.

The mess isn’t gone. My heart is touched anew with the pain that drew me to this work. I’m chafing at my own inability to bring order to an economic system that is leaving millions behind. And yet – the falling leaves call for play. And my guilt won’t help the families who have lost their own lawns. And sometimes, the best thing we can do with a mess is let the children play in it – knowing that, at least, I am teaching them to want enough for everyone.

To squeal with giggles just to watch them fly

To live a moment wholly free from griefs

Despite a world that tells my heart to cry

To rake up leaves then scatter them again

To watch sun set and know we’ll still have light

To feel the stab of joy that’s taught by pain

This blessing and this weight I feel tonight. 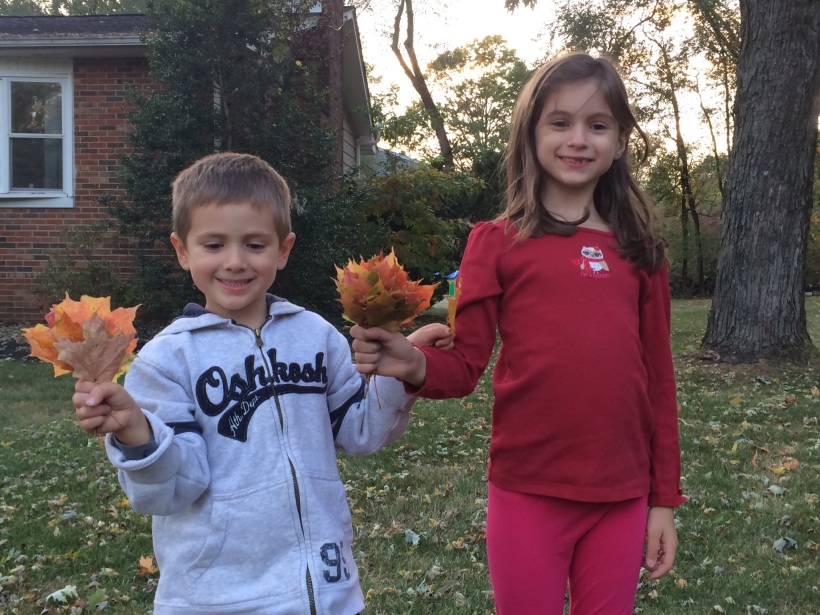 In early 2011 my family moved our home, temporarily, from New Jersey to Milan, Italy. In the process I quit what had been my dream job conducting policy-directed social science research, to focus on my other dream job, raising our two young children. The three-year adventure was exciting, exhausting, disorienting, fulfilling, and countless other contradictions. It also birthed in me a desire to share my reflections on life's joys and challenges with anyone who cares to reflect with me. Now that we have returned to the US I'm finding that the new perspective I gained in Europe has come with me, and gives me a whole new way of interacting with my home. There's still so much to learn and share! I hope you'll share the journey, and add your own lessons to my daily education.